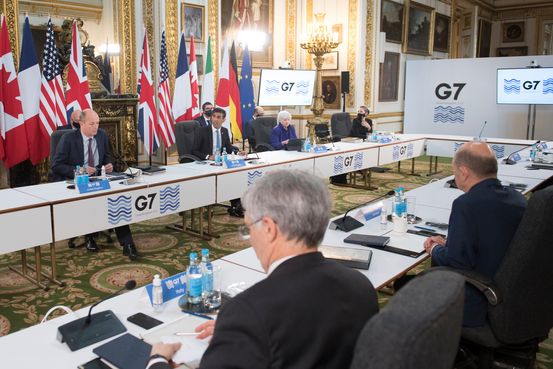 An agreement by wealthy countries to impose minimum taxes on multinational companies faces a rocky path to implementation, with many governments likely to wait and see what others, especially a divided U.S. Congress, will do.

hailed the deal, reached by finance ministers of the Group of Seven leading nations over the weekend in London. She called it a return to multilateralism and a sign that countries can tighten the tax net on profitable firms to fund their governments.

The agreement represents a turning point in long-running negotiations over where and how corporate profits should be taxed. The deal would impose a minimum tax of at least 15% and give countries more authority to tax the profits of digital companies like Apple Inc. and

that dominate global markets but pay relatively little tax in many countries where they operate.

While the impact on tech companies remains uncertain, some welcomed the prospect of a more uniform global regime.

Facebook Inc.’s vice president of global affairs, said on Twitter that the deal is a “step toward certainty for businesses” when it comes to taxes.

New tests come in the months ahead, as details get hashed out and governments see which country goes first. Those that move ahead before others could damage their revenue bases and companies, according to tax experts, and those lagging behind a global consensus could be hurt too.

“While we may see a deal, it’s then potentially 18 months or more to push it into the domestic law of each of the countries,” said Monika Loving, national practice leader for international tax services at advisory firm BDO. “In terms of revenue impact, we’re maybe two years off seeing tax administrations collecting any additional revenue.”

At the center of attention, some tax specialists, lawyers and officials said, is the U.S. Congress.

In countries with parliamentary systems, governments can quickly deliver on pledges, turning them into local laws and regulations. In the U.S., however, a slim Democratic majority in the House, an evenly split Senate, antitax Republicans and procedural hurdles complicate passage.

Other countries may be reluctant to change their laws or remove taxes that hit U.S.-based tech companies without seeing Congress move first.

U.S. lawmakers may take the reverse view, wary of raising taxes or ceding tax authority to other nations without assurances of a complete global accord. If the U.S. raises taxes and others don’t, disadvantages could arise from having a U.S. corporate headquarters.

Major political news, from campaigns to the Capitol.

Democrats can pass some changes on their own but have differences among themselves over tax policy. The Biden administration has also called for raising the corporate tax rate to 28% from 21% and setting the minimum tax on U.S.-based companies at 21% to fund other initiatives. And some Democrats have balked at those higher rates.

Republican votes may be needed if countries’ minimum tax changes necessitate renegotiating tax treaties, which require a two-thirds vote in the Senate for ratification.

The top tax-writing Republicans in Congress—

of Idaho—noted that the U.S. already imposed a form of minimum tax at 10.5% in 2017 and that other countries haven’t followed.

“We continue to caution against moving forward in a way that could adversely affect U.S. businesses, and ultimately harm American workers and jobs at a critical time in our country’s economic recovery,” they said.

The G-7, which comprises Canada, France, Germany, Italy, Japan, the U.K. and the U.S., agreed that businesses should pay a minimum tax rate of at least 15% in each of the countries in which they operate.

They also agreed to new rules that change which countries can tax which income in the increasingly digital economy. Those new rules will focus on large global businesses that have a profit margin of at least 10%. The right to tax 20% of profits above that threshold would be shared among governments.

The deal faces an early test in the Group of 20 leading economies, which includes all of the G-7 and a number of large developing countries such as China, India, Brazil and South Africa. Finance ministers from the G-20 meet in Venice in early July, and an overhaul of global tax rules is on the agenda.

Buy-in will also have to come from a broader group of 135 countries in what is known as the Inclusive Framework. Some countries with very low tax rates—such as Ireland, with a 12.5% charge on profits—are reluctant to sign up. The U.S. has proposed tax changes that would penalize companies from countries that don’t impose the minimum taxes.

“We’ll have to convince the other great powers, especially the Asian ones. I am thinking in particular of China,” France’s finance minister,

said in a television interview this weekend. “Let’s face it, it’s going to be a tough fight. I am optimistic that we will win it because the G-7 is giving us extremely powerful political momentum.”

While G-7 members agreed on the outlines of a new rulebook, they also left some unfinished business.

A number of countries from Europe raised the stakes in the long-running talks by announcing separate national levies on digital businesses, hoping those would pressure the U.S. into an international deal. In retaliation for what it saw as discrimination against U.S. companies, the U.S. announced punitive tariffs on imports from those countries, although it suspended those tariffs until the end of this year.

The G-7 didn’t agree on a schedule for removing those levies, a sign that decision makers aren’t sure exactly when new tax rules might come into play. In their final statement Saturday after two days of meetings, G-7 ministers said they would work on a path to removing the levies that will be tied to the new rules coming into force.

The broader changes, if enacted, would affect many of the world’s largest and most profitable companies, particularly in the tech sector. But the removal of the digital-services taxes would be a silver lining for tech companies. They have long said they would prefer an international resolution on taxes that result in higher bills to a patchwork of national levies.

Some tech executives have expressed worry that countries will attempt to hang onto their digital-services taxes even with a global deal on corporate taxes.

Matthew Schruers, president of the Computer & Communications Industry Association, which represents companies including

Google and Facebook Inc., applauded the G-7 agreement Saturday. However, he cautioned, “The work is not finished until the digital taxes that unfairly target U.S. businesses have been removed,” he said.

Many big tech companies, including Apple Inc., Alphabet and Facebook have in recent years already reported effective tax rates roughly around the 15% minimum rate proposed by the G-7, according to securities filings.

Companies that are below the rate, such as Apple, could see a potential increase in its tax bill under the proposed deal in some years.

Workers at Deere & Co. ratified a new six-year contract Wednesday, ending a strike against the farm and construction machinery...

China’s Taishan nuclear power plant, under scrutiny for safety concerns after reports of a gas buildup, is a project meant...

Capital Gains: A Century-Old Tax Break Gets a Rush of Attention

Suddenly, capital-gains taxes are all over the news. In late May, the Biden administration released details of its proposals to...