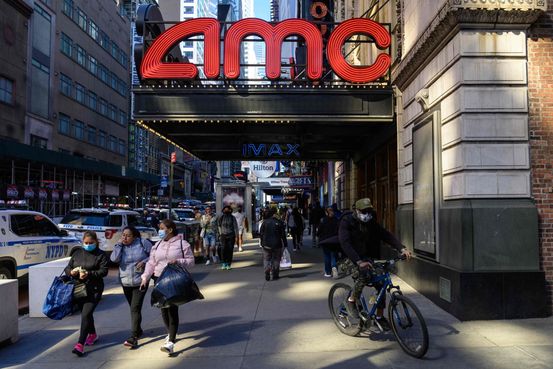 largest shareholder, China’s Dalian Wanda Group Co., has sold most of its shares in the movie-theater chain, according to a securities filing on Friday.

Wanda sold its stake over the past week. The theater chain’s shares have skyrocketed 160% in the past 12 months, buoyed by a Reddit-fueled frenzy that started with the videogame retailer

and bolstered the fortunes of other companies affected by the pandemic, including

The filing didn’t provide a reason for the sale, and a Wanda representative was unavailable for comment.

AMC said in a release Friday that

a Wanda official who serves as chairman of AMC’s board, and John Zeng, a Wanda executive and director, will resign from their board seats within the next 30 days.

Wanda’s stake in AMC goes back to 2012 when it first acquired AMC in a deal valued then at around $2.6 billion. Wanda took the company through a 2013 initial public offering and retained a majority of AMC’s shares.

“I salute Wanda for the immensely constructive role they played in building our company,” AMC Chief Executive

Wanda also sold other AMC shares earlier in the year. Wanda now owns 10,000 of AMC’s Class A shares, or 0.002% of the total shares outstanding. No single entity holds an ownership stake above 10%, AMC said.

“With no controlling shareholder in place, now AMC will be governed just as is most other publicly traded companies, with a wide array of shareholders,” Mr. Aron said during a March earnings call.

As part of a long-term strategy agreement, some of Wanda’s films will be shown at select AMC theaters.

“This continuing communication between the two companies should create a win-win situation for both Wanda Film Group and for AMC in the cinema and film industries,” AMC said Friday.

Appeared in the May 22, 2021, print edition as ‘Largest AMC Shareholder, Wanda, Sells Most of Its Stake.’