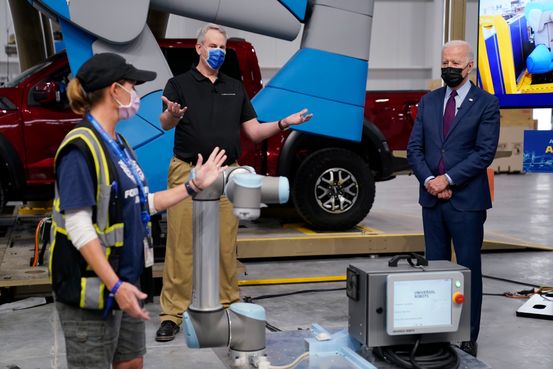 President Biden and Treasury Secretary Janet Yellen promoted the administration’s infrastructure and tax plans as vital for the U.S. to compete globally, as the White House and Republican lawmakers continued to pursue a deal to improve the nation’s bridges, roads and broadband internet.

Proclaiming himself a “car guy,” Mr. Biden visited Dearborn, Mich., on Tuesday to tour the

Rouge Electric Vehicle Center, using the facility to pitch his $2.3 trillion infrastructure plan, which includes funding for electric vehicles. He argued that his proposals would help create jobs and make the U.S. more competitive with countries such as China.

“The future of the auto industry is electric,” he said. “The real question is whether we’ll lead or we’ll fall behind in the race to the future. And whether we’ll build these vehicles and the batteries that go in them here in the United States or in other countries.”

Mr. Biden spoke in front of a lineup of trucks and referred to the Ford F-150 Lightning, a new electric pickup. Afterward he test-drove a vehicle that the White House said was that model.

“This sucker’s quick,” Mr. Biden told reporters. Asked if he would take a question about Israel, he said, “Not unless you get in front of the car as I step on it.” He then said he was teasing.

The president’s visit to advance his domestic priorities came as he is facing an escalating foreign policy challenge, amid a violent clash between Israel and the militant group Hamas. Dearborn has a sizable Arab-American population, and protests were under way there Tuesday.

Mr. Biden had voiced support late Monday for a cease-fire in a call with Israeli Prime Minister

though he has been under pressure from some Democrats, including Rep.

(D., Mich.), the only Palestinian-American in Congress, to do more to end the hostilities. Mr. Biden addressed Ms. Tlaib in his remarks Tuesday, calling her a fighter and saying he prays that her “grandmom and family are well,” referring to her family in the West Bank.

He then returned to his infrastructure plan, which provides $174 billion for electric vehicles, including funding to build charging stations and rebates and incentives for Americans to purchase electric cars. Some Republicans have said the package includes too much funding for the electric-vehicle industry and want Mr. Biden to give priority to fixing roads and bridges.

The proposal—one of two economic plans designed to invest in American workers and infrastructure—calls for fixing roads and bridges, as well as expanding broadband internet access and boosting funding for research and development. To help pay for the package, he has proposed raising the corporate tax rate to 28% from 21% and increasing taxes on U.S. companies’ foreign earnings.

Mr. Biden has said he is open to a compromise. A group of Republican senators met with administration officials Tuesday on an alternative GOP infrastructure plan.

Do you think there can be bipartisan agreement on an infrastructure deal? Why or why not? Join the conversation below.

“We believe we can find a bipartisan deal,” Mr. Biden said. “But doing nothing is not an option.”

The Senate Republicans who attended the meeting said the group discussed the timeline for the proposed infrastructure spending and alternative ways to pay for it, adding that they anticipate a response from the White House this week.

While the $2.3 trillion White House proposal calls for spending over eight years, the $568 billion GOP plan spreads the money out over five years. Republicans said any agreement on spending would depend on the time frame of the package, and Sen. Roger Wicker (R., Miss.), an attendee, said he would support an eight-year plan. Top Republicans have said they could support spending up to $800 billion.

“I wouldn’t be surprised if it ended up being an eight-year package, I think that’s realistic,” said Mr. Wicker, the top Republican on the Senate Commerce, Science and Transportation Committee. “Infrastructure takes time to build.”

Republicans have rejected the White House’s proposed tax increases, and lawmakers said they discussed various alternatives for financing the package at Tuesday’s meeting.

Speaking at a U.S. Chamber of Commerce event, Ms. Yellen sought to win support from business leaders, saying that the proposal would put U.S. companies on a better footing to compete overseas.

“We are confident that the investments and tax proposals in the jobs plan, taken as a package, will enhance the net profitability of our corporations and improve their global competitiveness,” Ms. Yellen said.

“We believe the corporate sector can contribute to this effort by bearing its fair share,” Ms. Yellen said. “At the same time, we want to eliminate incentives that reward corporations for moving their operations overseas and shifting profits to low-tax countries.”

Administration officials have been lobbying business leaders to back the infrastructure plan, saying investments in things such as job training and roads would benefit companies.

the chamber’s chief executive, said that the administration is correct to champion infrastructure but that the chamber disagrees with the need to raise corporate taxes to finance the spending. “We want to be there with them to do that, but there are other ways to finance it,” Ms. Clark said.

“The data and the evidence are clear,” she added. “The proposed tax increases would greatly disadvantage U.S. businesses and harm American workers, and now is certainly not the time to erect new barriers to economic recovery.”

Ms. Yellen, speaking at the chamber’s online Global Forum on Economic Recovery, said U.S. corporate taxes are at a historic low of 1% of gross domestic product and that the administration is seeking to return them to historic norms.

Corporate taxes as a share of GDP can be misleading because over time more U.S. business activity has shifted to forms taxed under the individual income tax system. Mr. Biden’s proposed corporate tax changes would push the U.S. from the middle of the pack among major economies to near the top.

Ms. Yellen repeated her call for a global minimum corporate tax to “stop the race to the bottom” in which countries compete for investment by offering the lowest tax rates.

If the U.S. raises its tax rates and imposes higher burdens on foreign profits of U.S. companies, a global minimum tax would help prevent companies based in other countries from having a potential advantage.

Ms. Yellen said the U.S. needs to invest more if it is to compete globally.

“We haven’t maintained our infrastructure let alone modernized it,” she said. “We haven’t sufficiently supported public research and development to ensure that America will maintain its technological edge. We haven’t embraced the investments in education and training that we need to keep up with technological change and to compete in the international marketplace as we once did,” she said.

Tribune Publishing Co. said Friday that its shareholders voted to approve a takeover offer from Alden Global Capital LLC, amid...

The only nuclear-power plant under construction in the U.S. is facing delays and additional costs. Again. Earlier this week, an...