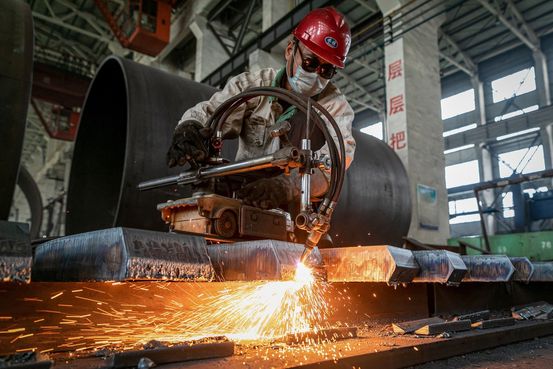 BEIJING—China’s economic growth moderated in May as flattering comparisons to the pandemic-hit economic figures early last year tapered off and Chinese consumers continued to keep a close eye on their pocketbooks.

Factory output, a key growth pillar in China’s pandemic recovery for more than a year, remained resilient last month, but investment and domestic consumption fell short of expectations despite a boost from a long holiday, weighed down by a fresh wave of Covid-19 infections.

China’s industrial production rose 8.8% from a year earlier in May, slowing from April’s 9.8% pace, data from the National Bureau of Statistics showed Wednesday. The reading of factory output, which was buoyed by strong overseas demand for Chinese-made goods, matched the median forecast made by economists polled by The Wall Street Journal.

The key gauge of factory activity was 13.6% higher than the level recorded in May 2019, long before the Chinese economy was hit by the new coronavirus, the statistics bureau said. Officials have been comparing monthly economic data with the same period two years earlier to filter out distortions from last year’s pandemic shock.

But if China’s factories have continued to top expectations, its consumers have been consistent in disappointing policy makers, who have been hoping for a pivot toward domestic spending as the main driver of the economy.

Retail sales, a key gauge of China’s consumption, rose by 12.4% last month compared with a year earlier, slowing from the 17.7% year-over-year growth rate in April and falling short of the 13.6% gain anticipated by economists.

“The direction of China consumption is to further improve, but the pace of its recovery will be slow,” said Hui Shan, chief China economist at Goldman Sachs. Ms. Shan said that even more than a year after the initial outbreak, Chinese consumers’ propensity to save rather than spend remained high.

That tendency toward caution has made domestic spending a laggard in China’s economic recovery, which has instead been powered primarily by industrial production, exports and government-backed investment.

“The catch-up of China’s consumption will take longer than the market previously anticipated,” Mr. Zhuang said.

a spokesman for China’s statistics bureau, acknowledged the unbalanced nature of the recovery, pointing Wednesday to a global economic rebound that was itself lopsided and facing rising global commodity prices.

Before Wednesday’s data release, some economists had expected China’s consumption to show signs of accelerating, following rosy figures from the five-day Labor Day holiday that ended May 5.

More recent data suggest that, with new infections flaring up around the country, prompting localized lockdown measures by officials, consumer spending may remain subdued for some time.

During the three-day Dragon Boat Festival that ended Monday, Chinese travelers made 89.1 million trips, according to official figures, roughly in line with pre-pandemic levels in 2019. But tourism revenues totaled $4.6 billion (29.4 billion yuan), some 25% lower than the same period in 2019.

Economists blamed a tightening of social-distancing rules for dissuading long-distance travel and keeping a lid on spending. Others said reduced volumes in the large shipping ports of Guangdong province, which accounts for roughly one quarter of China’s exports and one tenth of the nation’s economic output, could blunt a crucial driver of China’s economy while pushing up the prices of industrial goods.

Separately, China’s infrastructure investment, which is largely funded by local governments, slowed last month as localities slowed the issuance of bonds used to finance such projects.

Infrastructure investment in May turned negative for the first time since the pandemic, according to a calculation made by Zhiwei Zhang, a Shenzhen-based economist with Pinpoint Asset Management.

That decline weighed on China’s fixed-asset investment figures, which rose 15.4% in the January-May period from a year earlier. That was lower than the 19.9% growth rate recorded in the first four months of the year and the 16.6% figure expected by economists.

Ms. Shan, the Goldman Sachs economist, predicted that local government bond issuance, which as of May accounted for less than 20% of this year’s annual quota, will accelerate in the coming months, providing a fresh support for growth.

However, she warned that the increasingly unbalanced nature of China’s recovery as well as concerns about a real-estate bubble will likely keep central bankers from loosening monetary policy, even as many smaller enterprises in the service sector continue to struggle.

—Grace Zhu and Bingyan Wang contributed to this article.

Read more on the pandemic’s effects, selected by WSJ editors

Fed Officials Could Pencil In Earlier Rate Increase at Meeting

WASHINGTON—Federal Reserve officials could signal this week that they anticipate raising interest rates sooner than previously expected following a spate...

WASHINGTON—Friday’s jobs report keeps the Federal Reserve on track to begin informal internal discussions about reducing the pace of its...

Why Doing Good Is No Longer Bad Business

It seems the modern corporate mission statement could use an update: Do well by doing good—or else. Earning the perception...

Self-Driving Cars Could Be Decades Away, No Matter What Elon Musk Said