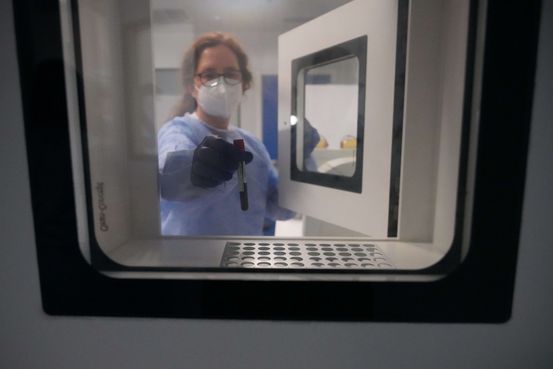 NV fell by almost half in premarket trading, pointing to hefty losses for investors when the market reopens, after the pharmaceutical company reported disappointing results from a study of its experimental Covid-19 vaccine.

Nasdaq-listed CureVac said late Wednesday that its vaccine was 47% effective against the disease in an interim analysis of a large clinical trial, a disappointing outcome likely to dim the shot’s prospects for wider use.

For its main listing in the U.S., shares were down 45% in off-hours trading. Shares in the company listed in Frankfurt traded 43% lower Thursday.

The setback could hinder vaccination campaigns in Europe because the German company has a contract with the European Commission to supply up to 405 million doses, one of the bloc’s largest contracts with a single company. CureVac has struck partnerships with big pharmaceutical companies

CureVac was once considered to be among the most hopeful candidates to develop a successful Covid-19 vaccine. It obtained support from the German government, which holds a stake of approximately 16% in the company, and the business was listed in the U.S. in August last year. The company had a market valuation of $18.29 billion by the market’s close on Wednesday.

Its stock price had already fallen in recent days because of mounting doubts surrounding the trial and the company’s ability to file for authorization for its vaccine in Europe in the second quarter as planned.

A government spokesman declined to comment on the interim analysis but said it wouldn’t affect Germany’s vaccination plan. On its website, the German health ministry is no longer counting CureVac in its vaccine delivery projections for the rest of 2021.

In comparison, those vaccines were at least 94% effective in large clinical trials last year before new virus variants spread significantly. The Moderna and Pfizer shots have formed the backbone of mass vaccination campaigns in the U.S. and other countries.

CureVac’s vaccine is slightly different than the Pfizer and Moderna shots, with a formulation that allows it to be stored at higher temperatures than the other shots.

Get a coronavirus briefing six days a week, and a weekly Health newsletter once the crisis abates: Sign up here.

CureVac conducted, with partner Bayer AG, a combined Phase 2/3 clinical trial of its vaccine, enrolling about 40,000 people in 10 countries in Latin America and Europe, starting in December.

Study volunteers received two doses of either the CureVac vaccine or a placebo, and researchers kept track of how many in either group came down with Covid-19.

The spread of new coronavirus variants may have played a role in the disappointing efficacy, CureVac said.

Some 57% of Covid-19 cases for which virus sequence data were available were caused by variants of concern—those that can be transmitted more easily or may cause more severe disease—and most of the remaining cases were caused by other, less characterized variants, the company said.

“While we were hoping for a stronger interim outcome, we recognize that demonstrating high efficacy in this unprecedented broad diversity of variants is challenging,” said CureVac Chief Executive

The company said the vaccine’s efficacy in the trial varied by age, with results suggesting effectiveness in younger people but not conclusive efficacy in those above age 60.

In March 2020, Germany’s government accused the U.S. of trying to lure CureVac to relocate to the U.S. to work on a vaccine.

The company continued to develop the shot after its founder, who had returned as CEO, suffered a crippling stroke and took a medical leave.

—Mauro Orru contributed to this article.

Corrections & Amplifications
The German government holds a stake of approximately 16% in CureVac. An earlier version of this article incorrectly said the stake size was 17%. (Corrected on June 17)

The tech giants stormed Hollywood this past week: Amazon.com Inc. announced its plan to buy the storied MGM studio for...

Blink Charging Co. is using cash acquired in a recent stock offering to expand its network of charging stations ahead...