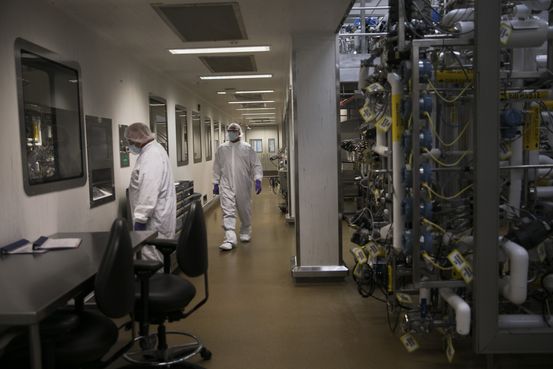 U.S. health officials have paused the distribution of two

& Co. Covid-19 monoclonal antibody treatments because of data showing that they aren’t effective against virus variants that are becoming increasingly common across the country.

The Department of Health and Human Services said Friday that it is immediately pausing all distribution of bamlanivimab and etesevimab together, as well as etesevimab alone to be paired with existing supplies of bamlanivimab, in the U.S. until further notice.

Get a morning briefing about the coronavirus pandemic three times a week and a weekly Health newsletter when the crisis abates.

These variants account for more than 11% of Covid-19 cases, a share that is growing, according to the Centers for Disease Control and Prevention.

Distribution of the antibody treatments was already paused because of concerns regarding their effectiveness with the variants in at least nine states including Rhode Island, Arizona, California, Florida, Washington and Massachusetts.

Lilly said that the company is working with governments and regulators to ensure antibodies are available to appropriate patients as variants continue to evolve.

The move comes after Lilly in April asked U.S. health regulators to revoke the authorization for use of bamlanivimab alone because of its lack of potency against some strains of the virus.

At the time the drugmaker said it would focus on distributing a drug cocktail containing bamlanivimab and etesevimab, citing studies that it would neutralize more of the variants when given together. The Food and Drug Administration granted the request.

Instead of the two treatments produced by Lilly, the FDA recommends healthcare providers use

REGEN-COV, which has been approved for use since last November, and

PLC’s sotrovimab, which was approved in May.

Both monoclonal antibody therapies were approved for the same use as Lilly’s treatments, and U.S. health authorities found that those treatments are likely to work in spite of the two variants.

The move reveals how emerging variants could pose challenges to both treatments and vaccines. The U.S. is racing to vaccinate Americans as more variants, including the highly transmissible Delta variant, gain a foothold in the country.

The Delta strain, which was first identified in India, could become the dominant strain in the U.S. in the coming weeks, according to researchers.

Monoclonal antibodies are engineered proteins that mimic the immune system’s response to fight off viruses. Lilly’s first treatment, bamlanivimab, was the first to receive emergency-use authorization in November for use in patients with earlier-stage Covid-19 who aren’t hospitalized but are at high risk. In February, the FDA authorized the combination of bamlanivimab with etesevimab, administered together for patients who are at risk of worsening to severe Covid-19, including those with certain medical conditions or who are ages 65 and over.

announced Friday that the FDA has authorized the company’s drug Actemra for treatment of adults and children ages 2 and older who are hospitalized for Covid-19 and are receiving corticosteroids and require oxygen or breathing support.

Facebook Inc. is giving most of its employees a choice: Seek permission to keep working at home or go to...

PG&E Corp. said it is likely to proactively cut power to customers in Northern California more frequently this fall in...

America’s home-buying frenzy is cooling off for the first time since it heated up last year, as limited inventory and...

The European Union’s top court is set to weigh in Tuesday on whether a privacy regulator in one country can...

Two Federal Reserve officials said that the day for the U.S. central bank to pull back on bond buying is...

Mining companies are throwing their weight behind vaccination efforts as Covid-19 continues to ravage much of the developing world. Miners...

Covid-19 Aid to Concert Halls, Theaters Set to Be Distributed Next Week