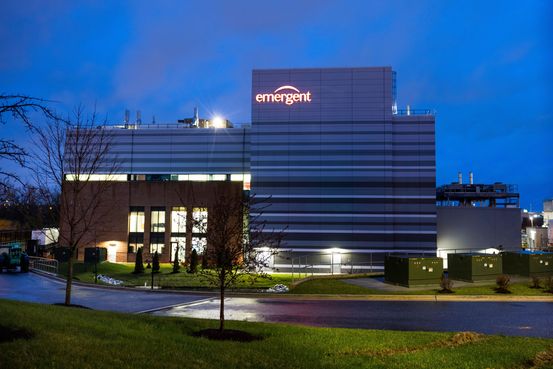 expect to announce as early as next week that contamination problems at a Covid-19 vaccine plant in Baltimore are resolved, clearing the way for millions more doses to become available.

Vaccine production at the plant run by contract manufacturer

was halted after unsanitary conditions led to contamination of J&J vaccines. The facility made vaccine substance and finished vaccine doses for J&J and

told a House committee last week that the company had produced enough of a key ingredient to yield more than 100 million doses of the J&J vaccine.

The company has been taking corrective measures and been in talks with FDA and J&J over the steps needed to reopen the facility.

Johnson & Johnson said it is working with Emergent to secure “as quickly as possible emergency-use-authorization in the U.S. for Covid-19 drug substance manufactured at Emergent Bayview.”

The emergency use authorization for the plant to produce Covid-19 vaccine could be made next week, the U.S. officials said. That could help toward fulfilling

with the rest of the world by the end of June.

The Baltimore plant has produced millions of doses that were in inventory awaiting authorization, but most aren’t finished and are placed in vials, the officials said, adding it could take months before all those doses are ready for use.

One official said that as part of that arrangement to get the plant online, the U.S. and J&J have tentatively agreed that about 60 million doses of J&J vaccine substance made at the Baltimore plant now will be cleared for use either in the U.S. or overseas.

AstraZeneca is still doing testing on about 60 million doses, also manufactured at the Emergent plant in Baltimore, that could be the subject of another agreement with the FDA in coming weeks or possibly still part of this one, another official said. AstraZeneca declined to comment for this article.

The J&J doses, when they are finished, would be enough to vaccinate about 60 million people with the company’s one-shot regimen. The AstraZeneca doses, if they become available, are a two-dose regimen and could inoculate about half that many people.

An accident at the Baltimore plant led to the contamination of material that could have yielded up to 15 million doses during January and February.

An FDA inspection of the Emergent plant in April concluded that the facility failed to maintain clean and sanitary conditions and didn’t take proper measures to avoid cross-contamination between the two vaccine lines.

Under an agreement with the U.S. government, the U.S. had paid Emergent $271 million of monthly reservation fees to be prepared to manufacture vaccines, but the government partially stopped payment after learning of the contamination, according to a memo from the Democratic staff of the House Select Subcommittee on the Coronavirus Crisis.

At a meeting of the subcommittee last week, Emergent executives blamed some of the problems at its Baltimore vaccine plant on having to produce the two different vaccines simultaneously in large quantities.

Mr. Kramer said that “ramping up production of two novel vaccines on a very large scale in the same facility is unprecedented.”

In an April 30 response to the FDA inspection report, Emergent said it had decommissioned the AstraZeneca portion of its plant in the Bayview section of Baltimore and has taken several steps to avoid any contamination of the J&J vaccine ingredient.

It said it planned to complete several remedial steps, such as repairing, cleaning and disinfecting the manufacturing plant and improving training of personnel at the site.

The company pledged to take several corrective actions during May and June, all of which need to be accomplished before fully recommencing manufacturing at the site.

A week before Lorraine Twohill applied to engineering school in her native Ireland, she found herself reviewing a brochure about...

One of the Federal Reserve’s most consequential challenges over the next few months will be communicating how it will pull...

Jobs for the City of Tomorrow

The Future of Everything covers the innovation and technology transforming the way we live, work and play, with monthly issues...