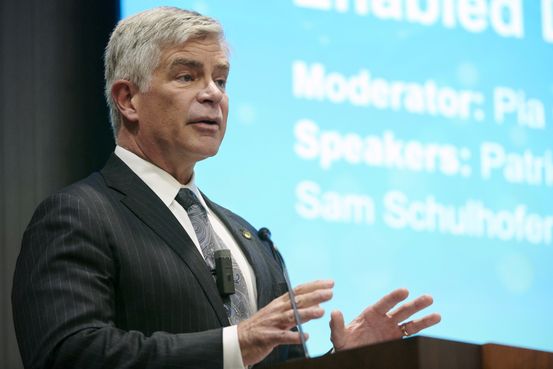 Federal Reserve Bank of Philadelphia President Patrick Harker said Thursday that while an interest rate rise lies some ways in the distance, he is ready for the U.S. central bank to begin slowing the pace of its asset buying stimulus this year.

“I am in the camp of starting the tapering process,” Mr. Harker said in an interview with The Wall Street Journal, referring to slowing the pace of the Fed’s $120 billion a month in bond purchases, which aim to augment the central bank’s near zero short-term interest rate target range.

Mr. Harker, who doesn’t currently have a vote on the rate setting Federal Open Market Committee, weighed in amid an active debate among central bank officials about paring support for the economy, which is roaring back to life from the impact of the coronavirus pandemic.

Officials have been focused on what to do with their $80 billion a month in Treasury bond buying and $40 billion a month in mortgage bond purchases. At the FOMC meeting last month, Fed Chairman Jerome Powell acknowledged officials are discussing pulling back on the support but offered no details for when, or how, that might play out.

From ‘FBI’ to ‘The Wonder Years,’ TV Networks Bet on More Franchises, Reboots

As ratings fall and viewers decamp to streaming platforms with fewer or no commercials, broadcasters are embracing the adage that...

The U.S. government has halted new shipments of the Johnson & Johnson Covid-19 vaccine, according to state and federal health...