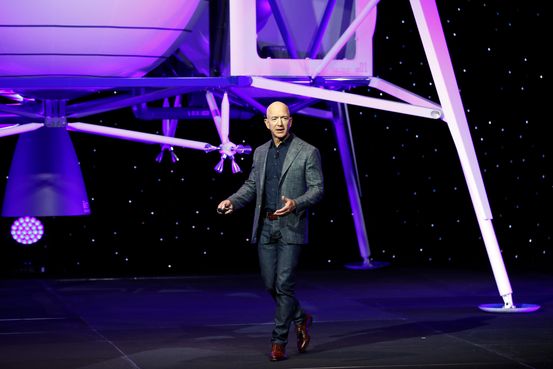 HOUSE THROWS UP ROADBLOCKS to funding for

Blue Origin space exploration company that was approved as part of the Senate’s bipartisan China competition legislation last week. Members from both parties made clear the $10 billion authorization, pushed by Washington Democratic

for a second moon lander contract (

SpaceX won the first contract earlier this year, while Blue Origin was one of two runners-up) was a nonstarter for the House’s version of science and innovation legislation.

Blue Origin filed a complaint with the Government Accountability Office after SpaceX won the contract, urging the government to reassess and award a second contract. Senate progressives like Bernie Sanders and Elizabeth Warren have urged their House colleagues to remove the measure.

and top Republican Frank Lucas this week put out a bill that takes a markedly different approach to U.S.-China competition and technological innovation, principally by spending much less, and it doesn’t include additional authorization for moon lander funds. Johnson has been skeptical of NASA’s goal of returning to the moon by 2024. NASA head

is supportive of the Senate measure, saying it “sets us on a path to execute many landings on the Moon in this decade.”

Beyond the expense and wisdom of pursuing another moon landing, House opponents of the measure take aim at its likely beneficiary: Bezos, whose primary company,

is in the House’s antitrust crosshairs.

the top Republican on the House Judiciary Antitrust subcommittee, flatly said “no” to whether he would consider funds for Blue Origin in China competition legislation. The top Republican on the Foreign Affairs Committee, Rep. Michael McCaul, said he expected the legislation to “change a lot” from what the Senate passed, and that he was giving priority to funding for semiconductor production over space exploration.

TEXAS LEADERS set up clash over the limits of state power. Texas Democratic

who leads the Ways and Means Health subcommittee, unveiled legislation to go around Republican-led states (like Texas) that haven’t expanded Medicaid by giving money directly to “willing” local governments under the Affordable Care Act. His bill has the support of the vast majority of Democratic representatives from states that haven’t expanded Medicaid. The bill would allow city, county and other local governments to apply directly to the Centers for Medicare and Medicaid Services to provide coverage through demonstration projects with 100% funding for the first three years and eventually phased down to 90%. It would strip states of some administrative Medicaid funds if their legislatures tried to bar localities from accepting funds. Doggett hopes to include the measure in a budget-reconciliation package.

The bill is the latest clash between Republican Texas state authorities and the Democratic-majority Congress and Biden White House. Gov. Greg Abbott signed a resolution this week that “notifies the President & Congress to cease acts of encroaching upon the powers of states.” “Their whole attitude about state sovereignty doesn’t apply to local sovereignty,” Doggett said in an interview. A spokeswoman for Abbott didn’t respond to requests for comment on Doggett’s bill. The Texas House held a vote on Medicaid expansion in April, rejecting it mostly along party lines. It is one of 13 states that hasn’t implemented the expansion.

7-ELEVEN, rather than a technology or agribusiness giant, is likely to be the first major company to find itself in the crosshairs of the Federal Trade Commission’s new Democratic majority. The convenience store giant is currently caught in the middle of a standoff between the commission’s two Democratic and two Republican members, with the Democrats raising antitrust concerns about 7-Eleven’s acquisition of 3,800 Speedway stores from

and the Republicans supporting a plan that would allow the deal if 7-Eleven sells around 300 of the stores.

With the confirmation of Commissioner Lina Khan, Democrats now have a majority on the FTC, and they could choose to sue to get 7-Eleven to sell more stores, or stick with the agreement already negotiated by FTC lawyers. “If the Commissioners approve that settlement, it will resolve all of the competitive concerns,” 7-Eleven said in a testy statement last month, in response to the Democratic commissioners’ concerns.

Should NASA try to return to the moon? Why or why not? Join the conversation below.

CLEVELAND-AREA HOUSE RACE becomes yet another round of the 2016 Democratic presidential primary, with Bernie Sanders supporters on one side and

supporters on the other. Top Sanders surrogate Nina Turner, a former Ohio state senator, is running against Shontel Brown, the local Democratic Party chairwoman who is endorsed by Clinton. Clinton sent out a fundraising appeal for Brown this week, and former Clinton allies in the Congressional Black Caucus hosted a D.C. fundraiser for her on Wednesday. Turner has been endorsed by the Congressional Progressive Caucus’s PAC.

MINOR MEMOS: National Park Service gives tips for dealing with bears in Yellowstone: “Do not push a slower friend down…even if you feel the friendship has run its course.” … Female senators invited to dine at vice president’s residence rave over Kamala Harris’s homemade cheese puffs. …

Bitcoin, dogecoin and other cryptocurrencies skidded Friday, extending their monthlong rout, following another cryptic tweet from Elon Musk. Bitcoin was...

New Talks on Infrastructure Face Old Problem: How to Pay for It

Discussions intensified among a group of centrist-leaning Senate Republicans and Democrats trying to strike a deal that could spend up...