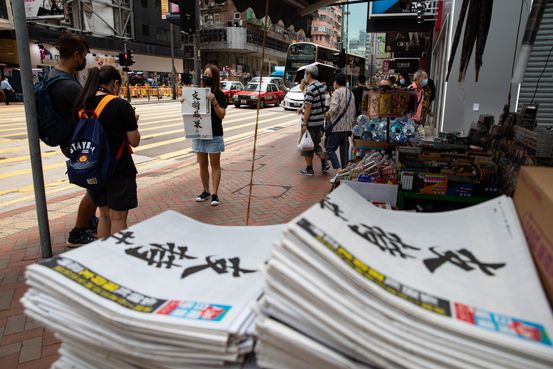 HONG KONG—The publisher of the popular pro-democracy Apple Daily newspaper said it may cease publishing after authorities froze its assets and charged senior executives including its top editor under the national-security law.

Its possible closure would herald the biggest blow to press freedom in the city since Beijing imposed a national-security law in June 2020 to crush dissent in the Chinese territory. Apple Daily and its jailed founder, Jimmy Lai, have been frequent targets for the city’s authorities.

, the newspaper’s publisher, met on Monday and set a Friday deadline to decide whether to close down operations, Apple Daily reported. The board voted to request that the government release portions of its assets so that it can pay its employees.

Apple Daily, which marked its 26th anniversary on Sunday, has faced a precarious future since police in May froze Mr. Lai’s assets, including his majority stake in Next Digital. On Thursday, the city’s security chief warned people to distance themselves from the arrested Apple Daily executives, saying they used news as a tool to challenge China’s national security.

“They basically made it illegal for anybody to deal with our accounts,” said Mark Simon, a former Next Digital executive and longtime aide to Mr. Lai.

Journalist groups in the city have said the action by police has sent a chill through the city’s media and undermined Hong Kong’s long history of press freedom.

Apple Daily openly supported antigovernment protests that rocked the city for months in 2019, and the paper has fiercely criticized China’s ruling Communist Party. In a sign of the newspaper’s enduring popularity, Apple Daily printed around 500,000 copies on Friday, a day after its top editor was arrested, and many Hong Kong newsstands quickly sold out.

Mr. Lai, a refugee turned clothing tycoon who founded Apple Daily in 1995, has been a top target of the national-security police and is awaiting trial on foreign-collusion charges. He is already in jail after being convicted of unlawful-assembly charges for participating in protests.

Authorities froze on Thursday the equivalent of $2.3 million from three related companies and arrested five Apple Daily executives, seizing dozens of computers and hard drives from its newsroom. Ryan Law and

respectively the editor in chief of Apple Daily and CEO of Next Digital, appeared in court Saturday and were charged with conspiring to collude with a foreign country or external elements and were held in jail. The other three were released on bail by police.

Elon Musk’s sale of roughly $5 billion in Tesla Inc. shares in recent days is likely just the start of...

Most S&P 500 CEOs got raises of about 5% or more as their companies recorded annual shareholder returns of about...

A group of private-equity firms is nearing a deal to acquire Medline Industries Inc. that would value the medical-supply giant...