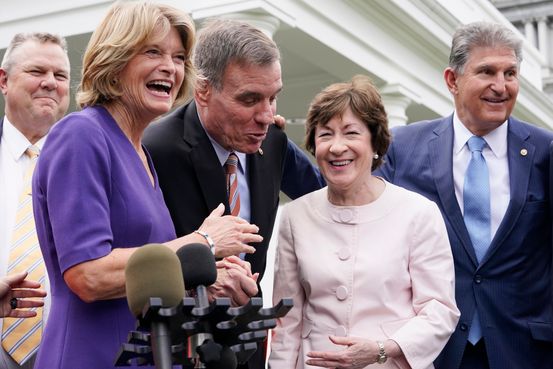 The big infrastructure deal President Biden and a group of senators from both parties announced Thursday is about much more than infrastructure. It may well be a test of whether bipartisanship can survive in today’s Washington on any big subject.

After all, if bipartisanship can’t be achieved on infrastructure—the motherhood-and-apple-pie issue of our times, where every lawmaker gets to send some federal dollars back home for projects their constituents can see and use—where can it happen?

That doesn’t mean the $1.2 trillion deal—which would represent one of the biggest investments ever made in the country’s operating systems—is sure to survive. It will face serious challenges on both left and right and could fall off the rails at many points in the weeks ahead.

What this deal may have going for it, though, is the yearning that many officials in both parties have to show they still know how to do this kind of thing together—and perhaps some reluctance to be seen as the skunk at this particular garden party.

The picture that emerged Thursday, of a president walking out the White House doors to stand with senators from both parties to announce an agreement on a big piece of legislation, shouldn’t be as startling as it was. It used to happen regularly; now, it seldom does.

Mr. Biden, as both candidate and as new president, promised that such scenes could reappear, yet making that happen has been devilishly difficult in a hyperpolarized Washington where partisan suspicions outstrip goodwill by a wide margin, and where the political penalty for compromise with the other side increasingly is a death sentence from within your own party.

Infrastructure always held out the prospect as the issue that could bring both parties to common ground. Every lawmaker’s district or state needs infrastructure help, businesses love improvements in the physical plant around them, unions love the jobs infrastructure spending creates. Former President

once sought an even bigger infrastructure package, until that idea fell apart amid a nasty feud with Democratic leaders.

Still, reaching this agreement in principle required some maneuvering that still could bring the deal falling down like a rickety old bridge. Getting the deal required jettisoning the spending on “human infrastructure”—education, healthcare, child care, antipoverty programs—that Democratic progressives demanded, and slimming down some of the president’s demands on physical infrastructure.

Some progressives aren’t happy. Rep. Alexandria Ocasio-Cortez wasted no time tweeting out a picture of the assembled bipartisan group of senators and the president, all of them white, and complaining: “The diversity of this ‘bipartisan coalition’ pretty perfectly conveys which communities get centered and which get left behind when leaders prioritize bipartisan dealmaking over inclusive lawmaking (which gives priority to delivering the most impact possible for the most people).”

Many on the Democratic left, especially in the House, will go along only if there is a parallel, simultaneous bill that contains many—though not all—of those health and family programs, which can pass with only Democratic votes under so-called budget reconciliation rules. And that is precisely what Mr. Biden promised will happen; he even declared he wouldn’t sign the bipartisan infrastructure bill without also getting a parallel bill containing Democratic priorities.

That legislative two-step, in turn, will leave some Republican conservatives arguing that Democrats aren’t actually giving up much in this compromise, because they can get GOP help to pass a big physical infrastructure plan Mr. Biden wants while also knowing they can get much of the rest of their wish list anyway, on their own.

Still, administration aides said the Republicans who negotiated the deal with Mr. Biden were well aware that Democrats would proceed with the “human infrastructure” programs they want under reconciliation in any case, and cut the deal on physical infrastructure anyway because they see it as worthwhile on its own terms. Moreover, complaints from progressives such as

actually may give bipartisanship a boost; if she is complaining, Republican negotiators can argue, then surely they have worked out something their party should like.

A big question now is how Senate Republican Leader Mitch McConnell will handle the moment. His initial reaction wasn’t particularly encouraging for those behind the deal. He complained that Democrats’ two-step plan means that the party’s leaders intend to “do whatever it takes to keep their runaway spending train chugging along this summer.”

Beyond the internal skirmishing, the broader implications of this moment transcend any road or bridge or airport project. They involve Washington’s leaders showing a doubting country, and a skeptical world, world that it remains possible for the leaders of the world’s most important democracy to pull together for something. “I think this is important for us domestically and internationally, to show we are able to find common ground and work together in our mutual interest,” said

Corrections & Amplifications
President Biden declared he would not sign the bipartisan infrastructure bill without also getting a parallel bill containing Democratic priorities. In an earlier version of this article, the word “not” was omitted in this sentence.

Monday brought disappointment for designer label Burberry, BURBY -8.19% and for deal makers in the world of European luxury goods....

WASHINGTON—Amtrak and the Biden administration have a $75 billion plan to transform passenger train travel across America—but aside from funding,...