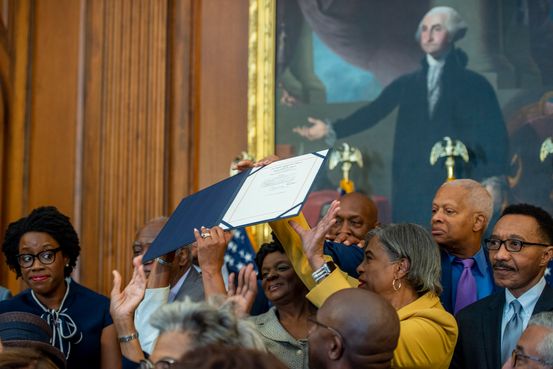 signed legislation making June 19, or Juneteenth, a new national holiday, he set off a race inside corporations to figure out how to mark it and whether to allocate more paid time off to workers.

and Ohio State University were among the organizations around the U.S. that quickly rolled out new holiday policies for workers, with some allowing people to take Friday off with mere hours of notice.

A key question for many companies has been whether to grant more paid time off at all. This week’s legislation to create the first federal holiday in nearly four decades came together quickly, prompting companies to make decisions about whether to give time now—or later—or offer a floating holiday or no time off.

Some opted to make Friday or Monday a holiday, since June 19 falls on a weekend this year. Other employers said they would offer an extra flex day to take off later. Many more are still trying to decide how to respond.

Stanley Black & Decker said it would begin officially observing Juneteenth as a company holiday for all U.S. employees starting in 2022, but also quickly rolled out a companywide day off on Friday.

Many others hesitated to quickly revamp existing time-off policies and holiday schedules.

, for example, said it would look at changing its calendar starting in 2022.

& Co. said in a letter to employees that it will recognize the new federal holiday this year by giving all eligible U.S.-based employees one floating day off, and will recognize Juneteenth in the bank’s regular holiday schedule next year.

Bank of America said it would add an extra paid day off for all eligible U.S. employees to use before June 18, 2022. The time off gives employees an additional paid personal day off they can use for religious, cultural or community holidays or for their well-being, the bank said.

In a note to employees Friday, Goldman Sachs CEO

said the firm will give all of its U.S. employees a day off that can be used before the end of the year.

Late Thursday, Ohio State University informed students, faculty and staff that its campus would be closed on Friday and classes were canceled for the new federal holiday.

arrived with federal troops in Galveston, Texas, and issued an order informing the last enslaved people in Texas that they were free. The day was observed at 9% of businesses before Congress moved to cement its status as a new federal holiday, according to a spring survey of 405 companies conducted by employer consulting firm Mercer LLC.

Although Juneteenth is now observed by two million federal employees, not all state and local governments or private-sector employers will necessarily follow suit. For comparison, Martin Luther King Jr. Day was given national holiday status in 1983 and all states have observed it since 2000. Currently, roughly 55% of companies give employees a paid day off to mark the holiday, according to the Mercer survey.

As more employers add Juneteenth to their holiday rosters, they may decide to subtract another holiday, such as Columbus Day or a floating personal day, but this year most will just add it to the calendar without tweaking other days, said

a senior partner at Mercer.

said he had just watched Mr. Biden sign the legislation to officially designate Juneteenth as a federal holiday when an email from his CEO arrived in his inbox. The note said that Mr. Murray’s employer, Interfaith Community Services in Escondido, Calif., would give Friday as a day off from work to celebrate the new holiday.

As part of the nonprofit, Mr. Murray, 60, helps people released from prison find work. He said he was thrilled to see the quick reaction by his boss and he plans to celebrate Juneteenth in the nearby community of Oceanside, Calif.

“It was pretty emotional,” he said. “Biden had just done the signing so I was already emotional from watching that and then boom, the email came across.”

Write to Patrick Thomas at Patrick.Thomas@wsj.com

It May Soon Be Time to Think About Tapering Bond-Buying

Federal Reserve Bank of Philadelphia leader Patrick Harker on Tuesday said he is getting ready to think about paring central...

A pathbreaking pill for lung cancer from Amgen Inc. was approved by the U.S. Food and Drug Administration, adding a...

Saudi retail and real-estate magnate Fawaz Al Hokair is planning to list his penthouse at 432 Park Avenue—one of New...

The median home price topped $350,000 for the first time in May as a shortage of properties and low interest...