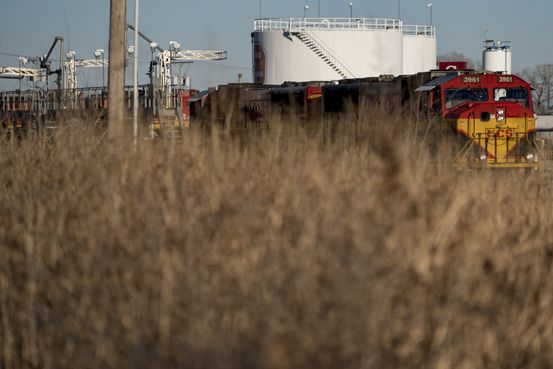 said it would combine with

The deal has an enterprise value of $33.6 billion, including the assumption of about $3.8 billion in Kansas City Southern’s debt, the companies said Friday. The combination would create the first freight-rail network linking the U.S., Mexico and Canada by connecting ports in the three countries.

Kansas City Southern is the smallest of the major freight railroads in the U.S. The company plays a big role in U.S.-Mexico trade, with a network sprawling across both countries. Its trains bring autos and other industrial products up from factories south of the border into Texas and the Midwest and haul U.S. farm goods back to Mexico. It also runs a rail link along the Panama Canal.

Kansas City Southern and Canadian National said they are confident in their ability to obtain regulatory approvals, including from the U.S. Surface Transportation Board and the Federal Economic Competition Commission and Federal Telecommunications Institute in Mexico.

Canadian Pacific said it would proceed with its application with STB to seek the board’s authority to “control KCS and its U.S. rail carrier subsidiaries.” The company has already received preliminary regulatory approval for the deal.

Canadian Pacific had agreed in March to pay what was then worth $275 a share—0.489 of its shares and $90 in cash. (The exchange ratio was set before Canadian Pacific’s recent five-for-one stock split.) The offer was worth about $25 billion when it was unveiled.

While the STB already approved a voting trust as part of Canadian Pacific’s deal, it said this week that it was denying Canadian National’s request for now, without prejudice, since no formal merger agreement had yet been filed at the time. An STB spokesman on Friday said the board is reviewing the materials submitted by Canadian National and Canadian Pacific.

Language in the STB’s decision for Canadian National’s request suggested that the board will be more cautious about granting a trust to Canadian National. Canadian Pacific is smaller and has less overlap with Kansas City Southern, which could give it a leg up in winning antitrust approval.

The deal would involve a two-step process. First, a voting trust would acquire Kansas City Southern shares and, assuming necessary approvals are obtained, the companies would then combine. Both the use of a trust and the combination itself need approval from the STB, which requires major railroad combinations to be in the public interest and enhance competition.

—Cara Lombardo contributed to this article.