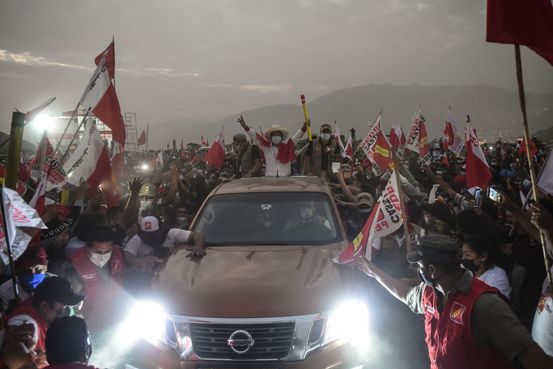 Latin America, which led the developing world in adopting the market-friendly model of economic development, may now be leading the world away from it. On Sunday, voters in Peru could elect as president

leader of a Marxist party that seeks to nationalize foreign-owned mines, invokes Lenin and

and questions democratic institutions such as a free press.

On the same day, Mexicans will decide how much control over Congress to give their leftist president,

Since taking office in 2018, he has expanded state control of oil, gas and electricity while undercutting the independence of the judiciary. And just weeks ago, Chileans elected a far-left slate of delegates to rewrite their constitution. A leftist already governs Argentina and polls suggest one could win Brazil’s presidential election next year.

While Latin America is no stranger to economic and political turmoil, the circumstances this time are quite different. The collapsing currencies, runaway government debt and hyperinflation that regularly plunged the region into devastating crises are largely absent (Venezuela and Argentina excepted). For that, thank the “Washington consensus,” a suite of policies including keeping budgets and inflation under control championed by the region’s finance ministers and central bankers, many trained at U.S. schools.

And yet in the past decade Latin America failed to achieve what mattered most: durable economic growth. Even before Covid-19, the region was stagnating. Per capita gross domestic product, adjusted for inflation and currency purchasing power, was the same in 2019 as in 2011. In that time China’s grew 66%, India’s 52%. Covid-19 knocked Latin American per capita incomes back another 8%, the International Monetary Fund estimates.

Latin America still lags behind in part because its rates of saving and investment remain far below Asia’s, and because of its dependence on commodities, which boomed on the back of Chinese demand, then went bust.

Peru was actually one of the region’s strongest performers; per capita GDP grew 2% a year from 2011 to 2019 and the proportion of the population in poverty fell from 59% in 2004 to 20% in 2019. “This was the Peruvian miracle,” said Oswaldo Molina, an economist who runs Redes, a Lima-based think tank.

But generous budgets didn’t translate into effective public services. When the pandemic struck, half of community health clinics lacked doctors, 80% had obsolete or unworking equipment and inadequate infrastructure, and the country had only 276 intensive-care beds, said Mr. Molina. Despite soaring education funding, half of schools are in poor physical condition. Many Peruvians work in the “informal” economy of street vendors, garment workers and food sellers and had no safety net when the pandemic shut down the economy. Incomes fell 12%, and poverty has shot back to 30%. Covid-19 death rates are among the region’s highest.

“
‘The pandemic was a huge punch in the face of the people. Without it, an option as extreme as Castillo would not exist.’
”

“The pandemic was a huge punch in the face of the people,” said Mr. Molina. “Without it, an option as extreme as Castillo would not exist.”

Healthy finances enabled Peru to implement one of the region’s largest fiscal relief packages. But because people in the informal sector often lack tax records, bank accounts or property titles, Peru was unable to get cash to many of them, said

a former finance minister and now an economic and political consultant in Lima. “Peru had the money to do those transfers and couldn’t because it didn’t have a register of where the poor people are,” he said. The persistence of informal work throughout the region reflects the still-high barriers to formal work and business.

Voter dissatisfaction throughout the region is also fueled by corrupt or ineffectual politicians. Presidents often can’t get important policies through legislatures fragmented among numerous political parties, said Andrés Velasco, a former Chilean finance minister and now dean of the School of Public Policy at the London School of Economics. Both Mr. Castillo and his right-wing rival

who are statistically tied in the polls, emerged from an 18-candidate first round of voting with less than 20% each. Should Mr. Castillo prevail, he may struggle to govern since his party doesn’t have a majority in Congress. Observers worry about the commitment of both to democracy.

Mr. Velasco calls the current political movement not so much left wing as antiestablishment, mimicking populist movements that put

in office in the U.S. and

in India. Brazilians elected Jair Bolsonaro as the right-wing populist alternative to leftist governments tainted by corruption before souring on him as well. Even in relatively prosperous and well-functioning Chile, demonstrators have called for giving priority to inequality and social services over growth.

Yet whatever the shortcomings of pro-market orthodoxy, neither Mr. Castillo nor his fellow leftists are likely to fare better, judging by the record of their fellow travelers.

have left Venezuela impoverished and isolated. Ecuador under socialist

grew much more slowly than Peru. Brazil, which performed well under the relatively pragmatic left-wing President

endured a crushing recession under his successor,

And yet there is little appetite for a return to the free-market, free-trade stances long championed by the U.S., in part because even the U.S. seems less attached to them. Said Mr. Velasco: “No one thinks about what the U.S. is doing anymore.”

Goat Group, Parent of Sneaker Marketplace, Valued at $3.7 Billion in Latest Funding Round

Goat Group, parent company of an online marketplace for sneakerheads, said it has raised $195 million through private investors to...

Rousselle Industrie SA, a maker of machinery for paint manufacturers in northern France, almost collapsed in 2020 after the pandemic...