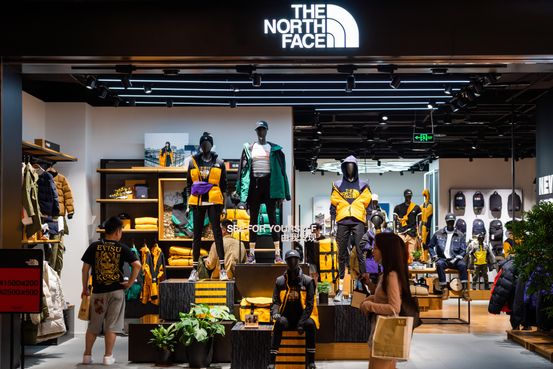 had just been erased from China’s internet for a similar statement.

Three other big apparel companies also pulled or altered statements critical of Xinjiang from their websites in the days that followed the boycott of H&M, according to a Wall Street Journal analysis. At Denver-based

, though, executives quickly convened to deliberate over what they felt was the right thing to do, according to a person familiar with the matter. Twenty-four hours after pulling its statement, the company posted a new, shorter statement reaffirming its stance.

The moves, previously unreported, show the mounting pressure facing Western companies doing business in China. The country has become one of the biggest and fastest-growing fashion markets in the world, and apparel companies have flooded in. But China’s government—and many of its shoppers—have become newly assertive in dumping brands they see as critical of Beijing.

Many big apparel companies, meanwhile, have made environmental and human-rights concerns central to their image in recent years, responding to demands by activists, governments and consumers in their home markets.

“Younger customers are more interested than ever in buying brands that reflect their values and represent a mission and purpose,” said

an analyst with the investment bank

“On the flip side, Western brands are searching for growth, and they don’t want to be locked out of the Chinese market.”

The two pressures have collided over Xinjiang, a vast western Chinese region that produces about a fifth of the world’s cotton.

Some Western governments and human-rights groups accuse Chinese officials of using forced labor among and committing genocide against ethnic Uyghurs and other Muslim minorities in Xinjiang. President Biden earlier this month led a push to get the Group of Seven wealthy democracies to jointly call out Beijing over the forced-labor allegations, though the statement didn’t go as far as U.S. officials wanted.

Chinese officials have called the allegations lies, saying China’s efforts in Xinjiang are meant to combat extremism and improve livelihoods. In recent days, Chinese state media have said forced labor couldn’t occur in Xinjiang’s cotton industry because it is so mechanized.

Chinese officials and nationalistic internet users have targeted brands that have joined in the criticism. The biggest victim so far: Sweden’s H&M Hennes & Mauritz AB. Last September, it posted an online statement raising concern over the accusations of forced labor and discrimination. It said it would terminate business relationships with suppliers found to be using forced labor.

An online-led consumer backlash against that stance in China quickly turned into a boycott, and then an erasure of H&M from much of China’s internet. It disappeared from e-commerce sites, and physical store locations were removed from map apps. Landlords closed about 20 out of its roughly 500 outlets in the country.

Chinese media outlets and social-media users also attacked other retail members of an industry trade group, called the Better Cotton Initiative, that had issued similar concerns over forced-labor allegations in Xinjiang. BCI is a coalition of fashion brands, nonprofit organizations and other groups that includes H&M,

VF, the North Face and Vans owner, is another member of BCI. In the days after H&M was disappeared, VF removed a similar statement about human-rights allegations from its website.

BCI also removed a months-old statement on its website raising concerns about forced labor in Xinjiang. It hasn’t publicly commented on the issue since. A BCI representative didn’t immediately respond to a request for comment.

In the days after the H&M boycott, Zara owner

also removed or altered similar statements, according to the Journal analysis of the websites of major publicly listed fashion companies. The Journal compared their websites this month with previous versions saved on the Internet Archive’s Wayback Machine dating to before the H&M boycott.

a Beijing-based branding consultant, said three other Western companies enlisted him to help them remove supply-chain statements that could offend the Chinese government by appearing to be lecturing Beijing. “What you don’t want to do is dictate,” he said. Mr. Shapiro said the companies, which he declined to name, were in the fashion, automotive and consumer-electronics industries.

After VF took down its statement, executives quickly reconsidered, according to people familiar with the matter. In less than a day, the company decided to reverse course and publicly reaffirm its concerns over Xinjiang in a new but shorter statement.

Another person familiar with the matter said VF always intended to republish its statement after a brief suspension amid the H&M backlash.

a VF executive overseeing the company’s responsibility initiatives, sent an email to a nonprofit labor-rights monitoring group called the Worker Rights Consortium. In the email, Mr. Cady said VF “temporarily” removed its Xinjiang statement “out of an abundance of caution” but publicly reaffirmed its position within 24 hours. The email, which was circulated among advocacy groups and shared online by one of them, said VF is maintaining its nearly two-year-old position of not sourcing any products or materials from Xinjiang.

“Forced labor is not tolerated in any tier of our supply chain,” wrote Mr. Cady. “We will not compromise our commitment to human rights as a result of external pressure in any form, including potential commercial impacts.”

China accounts for 7% of VF’s sales, according to the company’s 2020 annual report.

Spain-based Inditex, which operates Zara, Massimo Dutti and other brands, previously had posted a statement on its website saying it was concerned about social and labor “malpractice” alleged in Xinjiang. That statement was removed after the H&M boycott and hasn’t been reinstated.

L Brands, which operates Bath & Body Works and recently announced plans to spin off Victoria’s Secret, said on its website earlier this year that it was committed to eliminating forced labor, including in Xinjiang. Its website has since deleted the reference to Xinjiang.

After removing its original statement about its concerns over Xinjiang, PVH, which owns Calvin Klein, Tommy Hilfiger, Van Heusen, Izod and other brands, put up a shorter one that said PVH follows U.S. laws with regards to Xinjiang. The U.S. government bans cotton and tomato imports from Xinjiang unless the importers can demonstrate they weren’t produced using forced labor.

H&M never took down its statement, and its chief executive publicly affirmed its stance a few days later. The company is still largely absent from the Chinese internet. H&M hasn’t disclosed what effect the boycott has had on sales.

Xinjiang and the West

More coverage of the region, selected by WSJ editors

Write to Stu Woo at Stu.Woo@wsj.com and Suzanne Kapner at Suzanne.Kapner@wsj.com

The median home price topped $350,000 for the first time in May as a shortage of properties and low interest...

GameStop Corp.’s chief operating officer, Jenna Owens, has left the company, less than a year after joining. GameStop didn’t give...

Former Trump adviser Jason Miller says a new, free-speech-focused social-media platform he is leading has received financial backing from a...