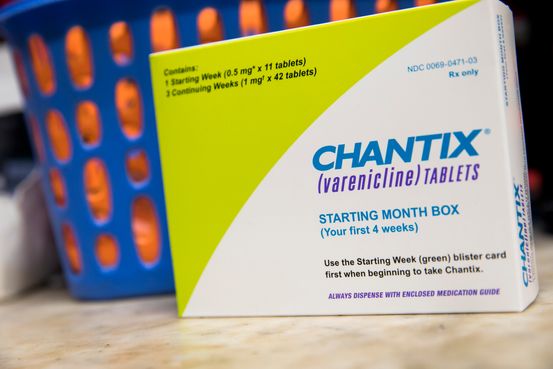 has suspended distribution world-wide of antismoking pill Chantix and recalled some lots after finding they contained heightened levels of a probable carcinogen, a company spokesman said.

The drugmaker is doing more testing to determine whether additional Chantix lots contain elevated amounts of the likely carcinogen, known as nitrosamines, according to the spokesman.

As a precaution, Pfizer suspended distribution while determining the extent of the contamination, the spokesman said.

The company said it was testing lots for the presence of nitrosamines at the request of the U.S. Food and Drug Administration and other regulators. It didn’t specify the number of lots affected or where they were found.

Pfizer, of New York City, said the drug’s benefits outweigh the potential risks, if any, posed by nitrosamine exposure from Chantix.

Canadian health regulators posted online a recall notice for the drug, which is called Champix outside the U.S. Chantix isn’t currently on the FDA’s online list of recalled products. The FDA didn’t immediately respond to a request for comment.

“We have worked hand-in-hand with regulatory authorities around the world,” Pfizer said.

Nitrosamines are common in water and foods, including cured and grilled meats, dairy products and vegetables, and aren’t thought to cause harm if ingested at low levels, according to the FDA’s website.

The chemical may increase the risk of cancer, however, if people are exposed to high levels and over long periods, according to the FDA.

Someone taking a drug that contains the impurities at or below the acceptable daily amount each day for 70 years isn’t expected to have an increased risk of cancer, the FDA website said.

The FDA has been investigating the presence of nitrosamines in certain medications.

Get a morning briefing about the coronavirus pandemic three times a week and a weekly Health newsletter when the crisis abates.

Last year, it asked several companies to voluntarily recall a common diabetes drug, named metformin, after the agency’s testing found higher-than-acceptable levels of a chemical in the nitrosamine class of compounds.

The presence of nitrosamines was also linked to widely used hypertension medications, some of which were recalled by manufacturers.

The FDA doesn’t recommend that patients taking prescription medications with potential nitrosamine impurities stop taking their medications but rather seek out physicians about concerns and other treatment options.

The FDA approved Chantix in 2006, a decision that at the time was hailed by public-health officials for its potential to help curb smoking addiction.

Safety concerns arose with reports of psychiatric side effects that eventually prompted the FDA to require a warning on Chantix’s label in 2009. Pfizer protested, and in 2016, the FDA stopped requiring the warning.

Cancer-related safety issues haven’t been detected in testing of Chantix or in individuals taking the drug who are trying to stop smoking, the Pfizer spokesman said. Smokers are up to 30 times more likely to get lung cancer than nonsmokers, he said.

China Delivers Three-Child Policy, but It’s Too Late for Many

When Li Fanfang, a 33-year-old former government worker in Hangzhou, was fired by her employer in December for having a...

The Trump Organization’s finance chief Allen Weisselberg surrendered to New York prosecutors Thursday morning as he and the company’s lawyers...

America’s home-buying frenzy is cooling off for the first time since it heated up last year, as limited inventory and...

CHICAGO—The owners of Roscoe Village Bikes say the shop should be thriving as Covid-19 restrictions fade away, but sales this...

HONG KONG—The world’s largest maker of surveillance equipment has long-established links to China’s military, including conducting a study with Chinese...