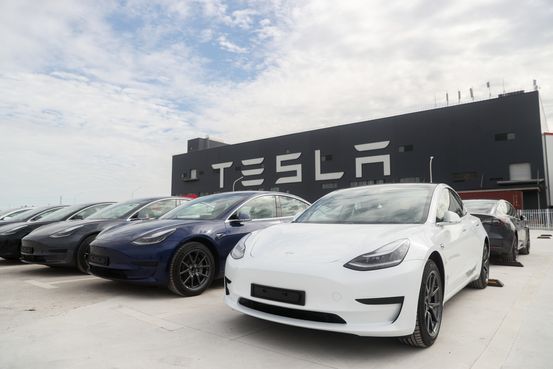 is recalling more than 285,000 passenger vehicles in China—including more than 90% of locally made vehicles sold by the company—because of safety risks associated with their cruise-control system, the country’s market regulator said.

The recall of the U.S. company’s automobiles came after an investigation into possible defects, which found that their cruise-control system could be accidentally activated and potentially result in an unexpected speed increase, the State Administration for Market Regulation said Saturday.

Affected Tesla customers can upgrade their cruise-control software remotely without having to go to the store, according to the company and the market regulator.

The regulator said it received a request from Tesla a few days earlier for the recall, which affects vehicles produced between December 2019 and June 2021.

“We apologize for the inconvenience caused by this recall to all car owners,” Tesla said through its official social-media account on Weibo, China’s Twitter-like platform. “Tesla will continue to improve safety in strict accordance with national requirements.”

A Tesla spokesperson said the company declined to comment further.

The recall adds to the electric-car maker’s woes in the Chinese market, where consumer confidence has already been rattled after a run of bad publicity over the company’s handling of customer complaints and perceived quality issues.

The recalled autos manufactured in China account for 93.7% of all sold Tesla vehicles that were made locally at the company’s Shanghai plant, according to figures released by the China Passenger Car Association. Tesla doesn’t publish its own monthly sales or production figures.

In April, Tesla faced a backlash when one of its customers staged a protest at Auto Shanghai, China’s premier auto-industry exposition, by shouting allegations about faulty brakes on Tesla vehicles. The incident prompted the company to issue a public apology and pledge to set up a customer-satisfaction unit as it assured buyers that it takes quality concerns seriously.

Read more articles on Tesla in China, selected by the editors:

In February, Tesla was summoned by Chinese authorities citing consumer complaints about quality issues in a rare rebuke for the company, the first foreign auto maker to operate a wholly owned plant in China. Chief Executive

has also had to reassure Chinese officials and consumers that Tesla cars couldn’t be used to spy on China.

Until its recent difficulties, Tesla had overwhelmingly been seen as a prestigious brand in China, boosted by the popularity of Mr. Musk, who has said that China’s fast-growing market will become the company’s largest. China currently hosts Tesla’s only operational plant outside the U.S. The vehicle maker won approval for its Shanghai factory in 2018 despite the deterioration of U.S.-China trade relations under then-President Donald Trump.

However, the adverse publicity due to quality concerns has led some Tesla owners and potential buyers to walk away. On Weibo, the recall prompted renewed criticism of the company, which some Chinese internet users called “arrogant.”

“The problem of brake failure has not been settled, and now there is a danger of sudden acceleration?” one user wrote.

—Raffaele Huang and Xiao Xiao contributed to this article.

For much of the pandemic, housebound consumers in the West snapped up goods ranging from personal computers to treadmills. Now,...

SHANGHAI— Tesla Inc.’s TSLA 1.01% sales in China rebounded in May after a short slump, a boost for the electric-vehicle...

The numbers do tell the story, at least for travel. A close look at the stats shows a big vaccine-fueled...

Almost a year into a global chip shortage, the problems are increasing for many customers as delays get even longer...