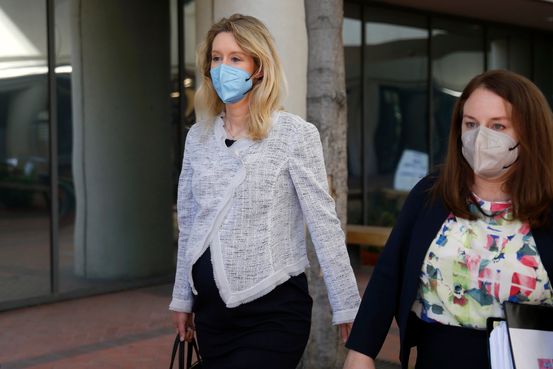 request to keep her emails with law firm Boies Schiller Flexner LLP out of her coming criminal fraud trial.

Ms. Holmes, who faces wire fraud charges for allegedly deceiving investors and patients about her blood-testing company, had argued that 13 documents showing communications she exchanged with Boies Schiller lawyers were protected by attorney-client privilege.

disagreed, writing in a short ruling Thursday that Ms. Holmes had no direct attorney-client relationship with the firm, led by famed litigator

Ms. Holmes has pleaded not guilty to the charges against her and faces a late-August trial. If convicted, she could face a 20-year sentence.

Until cutting ties with Theranos in 2016, Mr. Boies was one of the company’s fiercest defenders against questions about its technology and operations. He served as a director on the Theranos board, and Boies Schiller was paid for some of its Theranos work in company stock, The Wall Street Journal reported.

The documents at issue, according to court filings and statements in court by Ms. Holmes’s lawyers, are emails sent between 2013 and 2016 that discussed how Theranos should respond to the media, investors and regulators, including discussion of a potential legal action Ms. Holmes might pursue against the Journal.

The criminal charges Ms. Holmes faces followed reporting in the Journal that revealed failings in Theranos’s business practices and technology, which purported to test for a variety of health conditions from a few drops of blood extracted from a finger prick.

Boies Schiller began representing Theranos in 2011 in an intellectual-property dispute. The relationship grew to include offering advice on the Silicon Valley startup’s patent portfolio, interactions with the press and inquiries from government agencies, according to the Thursday ruling.

Judge Cousins said Ms. Holmes failed to show that the law firm and Mr. Boies were advising her in a personal capacity in addition to their work for Theranos. He also noted that none of the contested documents include conversations solely between Ms. Holmes and lawyers at Boies Schiller. All the emails include other senior Theranos employees or in-house attorneys, which the judge said cut against her privilege argument.

Ryanair Holdings PLC rejected Belarus’s account of the diversion of one of its planes Sunday, angrily condemning the forced landing...

WASHINGTON—The pipeline company hit by a multimillion-dollar ransomware attack last month is still working to fully restore some of its...

Amazon and Other Tech Giants Race to Buy Up Renewable Energy

The race to secure electricity deals for power-hungry data centers has tech companies reshaping the renewable-energy market and grappling with...

Venmo to Charge Users for Selling Goods and Services