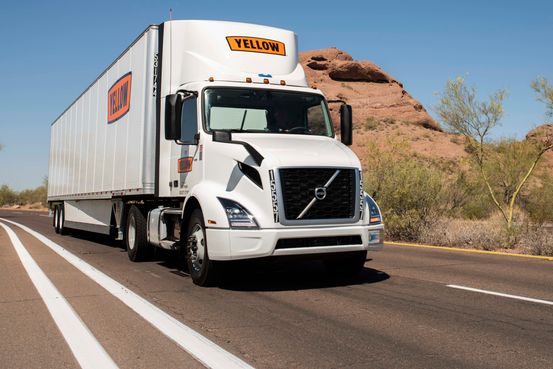 is pushing ahead with a sweeping overhaul aimed at making the large but financially troubled carrier more competitive in a resurgent freight market.

One of the biggest trucking companies in the U.S., Yellow will combine its regional and national trucking operations into one unified network, a move the company says will modernize operations, eliminate waste and make it simpler for customers such as

Overland Park, Kan.-based Yellow had been struggling for years when the pandemic plunged the company into a liquidity crisis. A $700 million federal coronavirus-relief loan provided a lifeline that allowed debt-laden Yellow, then called

to invest in new equipment and pay off millions in missed health, pension and other obligations.

Top news and in-depth analysis on the world of logistics, from supply chain to transport and technology.

Despite the federal support, which the government said it provided because the company is a key supplier of military transport services, Yellow has lagged behind its peers as the rebounding American economy has spurred more freight demand.

The carrier swung to a $63.3 million net loss in the first quarter, when bad weather shut down operations at many of its freight terminals, and reported a 61.3% year-over-year decline in adjusted earnings before interest, taxes, depreciation and amortization expenses, to $13.2 million. Yellow competitor

a Thomasville, N.C.-based trucker, notched a 14.1% gain in revenue during that period, and its $199.4 million in quarterly net income was nearly 50% ahead of the year-ago period.

Yellow executives say bringing its networks under one umbrella—an effort that began in 2019 and gained momentum after last year’s $700 million federal loan—could help close the gap.

More profitable trucking rivals such as Old Dominion and

have gained market share in recent years by offering streamlined service for both regional and long-haul transport. Yellow’s integrated network will offer one-day, two-day and three-day shipping options, the business the company says is the fastest-growing, along with what it calls “budget-friendly long-haul services.”

Yellow is one of the largest U.S. operators in less-than-truckload shipping, a transport niche critical to retail and industrial supply chains, in which operators combine shipments from multiple customers on a single trailer. The company’s Holland, New Penn and Reddaway brands provide LTL service in the Midwest, the Northeast and the West, respectively, while its YRC Freight business offers national coverage.

“Many times you’ll see customers who have multiple brands backed up to their dock at the same time. That creates inefficiency for them, and frankly it creates inefficiencies for us,” said Yellow President Darrel Harris, who is overseeing the integration. “Imagine them making one phone call and getting one truck with one driver. That’s what they want.”

Yellow plans to integrate its trucking brands by the middle of 2022, a tight timeline for a process that transportation-industry consultants say can be tricky and time-consuming. A previous integration of two national networks after the company’s 2003 purchase of rival Roadway, which eventually created Yellow’s YRC Freight unit, took years to complete.

“Each of their regional carriers has a separate and distinct footprint,” said

co-founder and chief of relationship development with logistics and freight management consulting firm TranzAct Technologies Inc. “If it were that easy, they’d have already done it.”

Time is working in the company’s favor, said

president of transportation research firm SJ Consulting Group Inc. “Right now, the LTL market is so tight that shippers are more accepting of service issues” and disruptions that may occur during the transition than they would normally be, he said.

closed its $800 million acquisition of

UPS Freight business, and plans to step up investment in an LTL business under the name TForce Freight.

The largest opportunity to improve Yellow’s business “is to successfully complete the transition to One Yellow,” said Mr. Harris, who joined the company last year and spent much of his career at

Freight division. “That’s what really gets us on the path to turning things around.”

WASHINGTON—President Biden is expected to propose a $6 trillion budget on Friday that would lay the foundation for his plans...

Mining companies are throwing their weight behind vaccination efforts as Covid-19 continues to ravage much of the developing world. Miners...