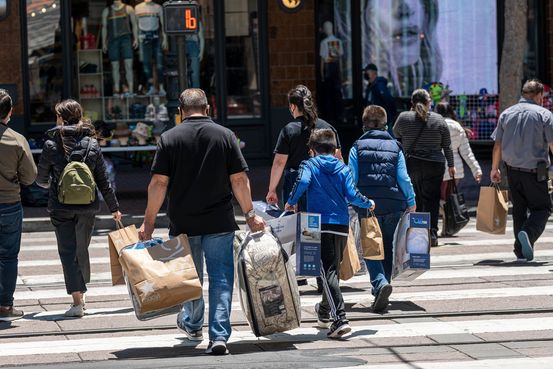 The prices that suppliers are charging businesses and other customers rose again last month, adding to inflation pressures bubbling through the U.S. economy.

The Labor Department said Tuesday that its producer-price index rose 0.8% in May from the prior month, up from the 0.6% increase in April from March. The average rise between 2017 and 2019 was 0.2%.

So-called core prices, which exclude volatile food, energy and trade components, rose 0.7% in May from the month before.

Most of the increase in overall producer prices came from a rise in goods prices, which leapt 1.5% in May from April. Price increases were broad-based. The goods prices that jumped the most in May included beef and veal, up 10.5%, and mobile homes, which climbed 3.5%. Prices for new autos, machinery and equipment, and furniture also picked up sharply. While goods prices drove the bulk of overall producer inflation, the prices for services advanced 0.6% in May, from the prior month, marking the fifth straight monthly increase.

The PPI is different from the department’s more widely followed consumer-price index, which only measures the final prices paid directly by households for goods and services. The PPI also includes prices paid by companies, governments, third-party payers such as insurers and buyers in other countries. The CPI, unlike the PPI, includes taxes and user charges and the prices of imported goods and services, because they are part of the total costs paid by consumers.

The PPI captures various changes in prices as products move through the economy, said

supervisor economist with the PPI division at the Labor Department. For example, the price that a manufacturer charges a wholesaler for a washing machine shows up in PPI. The CPI captures what the consumer paid the retailer for the appliance, including taxes.

The two measures often diverge. But with consumer prices rising at the fastest pace in 13 years, economists are watching the PPI for clues about the sources of inflationary pressures driving consumer prices.

For years economists paid minimal attention to the PPI since it tends to be volatile and doesn’t always move in sync with CPI, said

That has changed since January, she said. That month, the PPI surged 1.3% versus the previous month and has stayed elevated since. The pickup at the start of the year presaged the stronger-than-expected rise in consumer prices in April and May.

senior economist at PNC Financial Services Group. “We know we’re in the middle of an inflationary shock but what we still don’t know is how bad it is. That’s a big part of what we’re looking to these inflation data for.”

The recent pickup in consumer and producer prices reflects many factors, including scrambled supply chains, lengthened delivery times, higher transportation costs and rampant shortages of materials and labor—as well as the recovery in energy and commodity prices that collapsed in 2020 with the onset of the Covid-19 pandemic.

The recent increases in PPI may indicate that businesses are passing on these higher production costs to customers, some of which are translating to higher retail price tags on store shelves across the country. Unusually strong demand as a result of the receding Covid-19 crisis and ample federal support of incomes is likely enabling them to do so, said Ms. Clark.

“Incomes for households are stronger than pre-Covid levels, and there’s substantial savings. So there is a degree where people are willing to accept higher prices,” she said.

Have you noticed higher prices in consumer goods? Which ones? Join the conversation below.

The PPI also is useful in anticipating changes in the Federal Reserve’s preferred inflation measure, the price index of personal-consumption expenditures. Fed officials are tracking a variety of inflation gauges as they work to determine how much of the current inflation surge is likely to prove transitory or lasting.

Fed officials have said they expect inflation to rise temporarily this year. But a big, sustained increase could compel them to tighten their easy-money policies earlier than planned, or to react more aggressively later, to achieve their goal of 2% average inflation. Fed officials could signal Wednesday that they anticipate raising interest rates sooner than previously expected following the recent spate of higher inflation readings.

“Even if this inflation shock comes from discrete pandemic-related causes there’s always the risk that those price increases could spill over to the rest of the economy,” said Mr. Adams. “While that risk still seems low the more [PPI] rises the less small that risk becomes.”

The PPI dates back to 1913, making it one of the oldest ongoing U.S. economic statistics. The department overhauled it in 2014 to help it capture the modern economy.

A gusher of money is spilling out from the U.S. economy and rippling around the world, driving the global recovery...

Federal Reserve Bank of Philadelphia President Patrick Harker said Thursday that while an interest rate rise lies some ways in...

ViacomCBS Inc. said it is naming chief executives of Nickelodeon and MTV Entertainment Group as it readies a major international...

Sentiment among Japan’s large manufacturers rose to the highest level in 2½ years during the second quarter thanks to a...