WASHINGTON – It is the unofficial start of summer in the United States: Mask mandates are gone and mimosa brunches, backyard barbecues, and summer camp are back.

As at Saturday (May 29), more than 130 million Americans – 40.5 per cent of the population – have been fully vaccinated against Covid-19. New cases of coronavirus infection have, on average, dipped below 25,000 a day. Daily deaths due to the disease have fallen well below 1,000.

Yet many analysts and epidemiologists are keeping their fingers crossed.

Pockets of resistance to vaccination still remain and might slow down the inoculation rate. Gatherings this long Memorial Day weekend might spark new outbreaks.

“That’s where I am worried: We will see a smaller surge this time around. I think for the rest of the country, we’re probably going to be in pretty good shape,” said Dr Jha.

Vaccine scientist Peter Hotez wrote on Twitter: “Nationally, we’re only at 50 per cent single-dose vaccination, 40 per cent fully vaccinated; about 10 points higher in both categories in the north-east but far lower in the underperforming south. The south is highly vulnerable this summer to a surge.”

Fewer people are getting vaccinated in the southern states, with Louisiana, Mississippi and Alabama registering half the vaccination rate of Vermont or Massachusetts in the north, he noted.

Dr Thomas Hale, associate professor in global public policy at Oxford University’s Blavatnik School of Government, told The Straits Times: “The United States – and I would put Israel in the same category – (has) basically taken the approach (that) we’re getting to a critical mass of vaccines, so we can afford to drop all other protections.

“Those two countries are probably unique in that stance. My view is… that’s a very bold approach, a little bit lacking in caution.”

The Blavatnik School of Government maintains the world’s largest database on government responses to the pandemic.

Dr Hale continued: “It’s assuming that we won’t see significant variants emerge that can defeat vaccines. And that’s assuming that the rates of vaccination will continue up to the point where all of the people who are likely to get it are going to develop vaccine-based immunity.”

He added: “And I don’t know that the United States is in a great position to think about that because there is a significant degree of vaccine hesitancy in the US population, people who for political or cultural or other reasons just don’t want to get the vaccine.

“And that’s a huge weakness, I think, in this strategy. Imagine that you get to a point where 30 per cent of the population doesn’t want to have the vaccine. That’s a lot of people who can still die of Covid-19.

“There’s a very large pool of vulnerable people. And I worry that in the fall or so, the limits of that strategy might become apparent, even if they’re less apparent right now.”

Washington, DC presents an example of racial disparities. A report from the Department of Health last week found that Black residents have made up 80 per cent of new Covid-19 cases in the capital in recent days. White people account for less than 10 per cent. 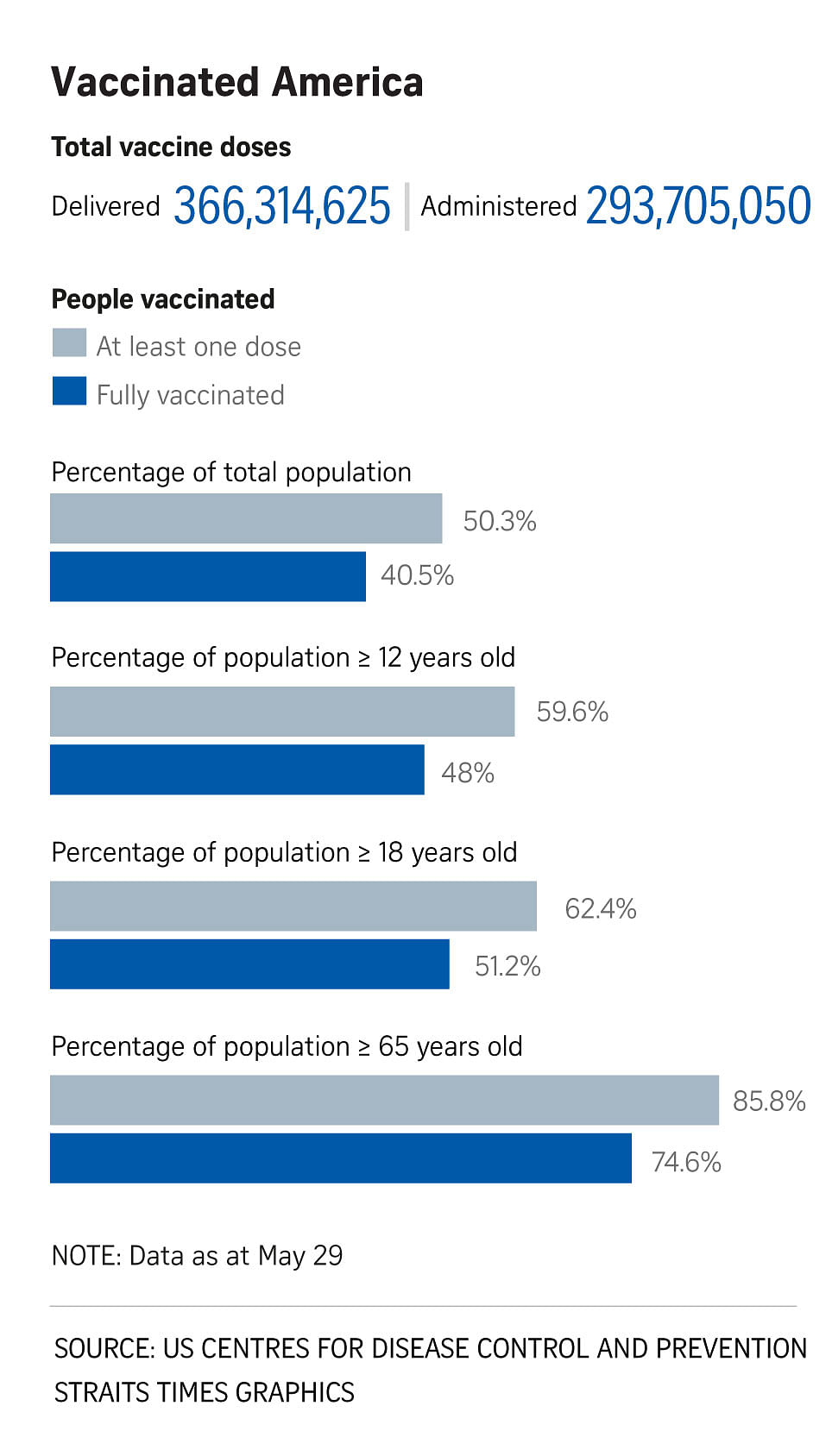 Meanwhile, exemplifying the ideological and politically charged nature of the vaccine divide, an upscale shop in Nashville, Tennessee was last week selling Jewish star patches for people to wear to proclaim they were “not vaccinated”.

Mr Ivo Daalder, a former US ambassador to the North Atlantic Treaty Organisation and currently president of the Chicago Council on Global Affairs, wrote on Twitter: “As a young schoolgirl in Holland, my mother was forced to wear a yellow star by the Nazis to identify her as a Jew. It’s beyond grotesque to sell this evil symbol to proclaim one’s not vaccinated. Where does this end?”

JERUSALEM (REUTERS) – Prime Minister Benjamin Netanyahu faces an end to his long hold on power in Israel on Sunday...

WASHINGTON (REUTERS) – The United States is planning to evacuate a group of vulnerable Afghan interpreters before the US military...

SAN FRANCISCO (REUTERS) – Microsoft said on Friday (June 25) an attacker had won access to one of its customer-service...

WASHINGTON (NYTIMES) – In a stunning setback to regulators’ efforts to break up Facebook, a federal judge on Monday (June...

OTTAWA (REUTERS) – A Canadian lawmaker is temporarily stepping down from some duties and is “seeking assistance” after being caught...

WASHINGTON (REUTERS) – A bipartisan infrastructure plan costing a little over US$1 trillion (S$1.34 trillion), only about a fourth of...

COPENHAGEN (AFP) – The US spied on top politicians in Europe, including German Chancellor Angela Merkel, from 2012 to 2014...

SURFSIDE, FLORIDA (REUTERS) – Some families of the missing at the Miami-area building collapse have found comfort in therapy dogs...

Concerns mount that Johnson & Johnson Covid-19 vaccine doses in the US could go to waste, United States News & Top Stories

NEW YORK (NYTIMES) – US state health officials are growing increasingly concerned about whether doses of the Johnson & Johnson...

PARIS (AFP) – Several thousand people marched on Saturday (May 22) in Paris and other French cities in support of...

WASHINGTON (REUTERS) – More than half of all adults in the United States have been fully vaccinated against Covid-19, the...