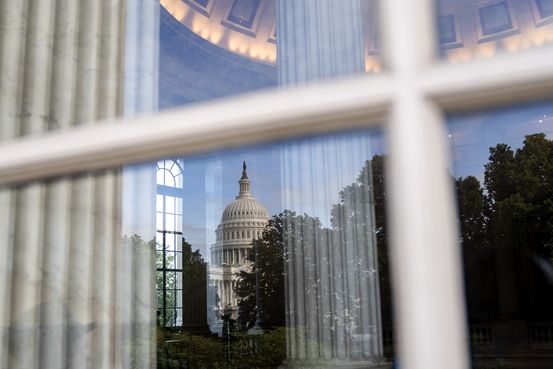 WASHINGTON—The White House and Senate negotiators sought to keep a bipartisan infrastructure deal on track Sunday after its future was cast into doubt when President Biden made and then withdrew a suggestion that he would veto the proposal if lawmakers failed to pass a separate antipoverty package favored by Democrats.

Several Senate Republicans who reached agreement with Democratic lawmakers and the president on infrastructure appeared reassured Sunday by Mr. Biden’s statement a day earlier walking back his comments tying the fate of the roughly $1 trillion infrastructure agreement to the larger piece of legislation that could cost trillions more.

“I am glad they have now been delinked and it’s very clear that we can move forward with a bipartisan bill,” said

The negotiations at the start of a summerlong legislative blitz represent the biggest test yet of Mr. Biden’s ability to achieve a bipartisan victory in the first year of his presidency. The former vice president has pointed to his three decades in the Senate as proof of his deal-making abilities at a time of deep partisan polarization, increasing the stakes for Mr. Biden, should the deal collapse.

Major political news, from campaigns to the Capitol.

While spending the weekend at Camp David, the presidential retreat in Maryland’s Catoctin Mountains, Mr. Biden spoke by phone with several senators in the bipartisan group that reached the agreement, officials said. And the president planned to travel to Wisconsin on Tuesday to make a speech on the economic benefits of the infrastructure proposal.

A group of 21 senators, including 11 Republicans and 10 members of the Democratic caucus, had lent their support to the deal, which provides $579 billion above expected federal infrastructure spending. The bill includes funding for improvements to roads, bridges, transit and airports as well as enhanced infrastructure for broadband, water and electric vehicles.

The infrastructure bill, a central plank of the Biden agenda, already faced a complex path to passage in the narrowly divided Congress.

In the Senate, Democrats hope to pass the bipartisan bill by drawing enough Republican votes to reach the 60-vote threshold required for most legislation to advance. They also hope to pass the broader bill, which expands child care, Medicare, affordable housing and other programs under a special process tied to the budget, known as reconciliation, that requires only a simple majority.

a former Louisiana congressman who serves as a top aide to Mr. Biden, said on “Fox News Sunday” that the president was “making sure that we’re talking about the issue and not the process. The issue is we have to invest in our country with crumbling bridges and roads, and we’re going to deal with it.”

Asked on CNN whether the president would sign the bill on its own without the budget reconciliation package, Mr. Richmond wouldn’t say. “I don’t think it’s a yes or no question,” he said.

(R., Wyo.), the chairman of the Senate Republican Conference, said Republicans would need more reassurance from the president that the bill wouldn’t be handcuffed to the larger package.

“Look, I’m a doctor, and I will tell you, you can get whiplash by trying to follow

(R., La.) said he thought Mr. McConnell would support the plan “if it continues to come together as it is.”

“If you put your finger up in the air, you’re going to feel a breeze blowing in favor of this bill,” Mr. Cassidy said.

“
‘If you put your finger up in the air, you’re going to feel a breeze blowing in favor of this bill.’
”

As Mr. Biden seeks to win passage of the infrastructure bill, he is trying to balance his interest in gaining a bipartisan achievement with Republicans with demands from liberal members of his party. They have pushed for an array of social-welfare items under the proposed American Families Plan, which would be part of a budget package that an early Senate draft set at $6 trillion.

(D., N.Y.) plans to bring up in July both the bipartisan bill and the budget resolution, which will set the overall spending levels and parameters of the larger package. Lawmakers expect to work on passing that proposal in September, following Congress’s August break. House Speaker

(D., Calif.) said last week she wouldn’t bring up the bipartisan infrastructure bill unless the broader package had passed the Senate.

A 50-50 divide in the Senate, with Vice President

casting any tiebreaking vote, and a narrow majority in the House for Democrats have complicated those efforts.

(D., N.Y.) said on NBC’s “Meet the Press” that House Democrats are committed to making sure that Democrats pass the broader plan.

“It’s very important for the president to know that House progressives and I believe the Democratic caucus is here to make sure he doesn’t fail,” she said. The president shouldn’t be limited by Republicans, she said, in light of the Democratic majority.

“We really need to understand that this is our one big shot, not just in terms of family, child care, Medicare, but on climate change,” Ms. Ocasio-Cortez said.

(D., W.Va.), a key swing vote in the Senate, on Sunday signaled he might be willing to support a broader spending package of $2 trillion beyond the infrastructure proposal. Mr. Manchin said on ABC that he would support a reconciliation bill that included raising the corporate tax rate to 25% from its current 21% and taxes on capital gains to 28%, a more modest increase than that proposed by Mr. Biden.

—Stephanie Armour and Rachael Levy contributed to this article.