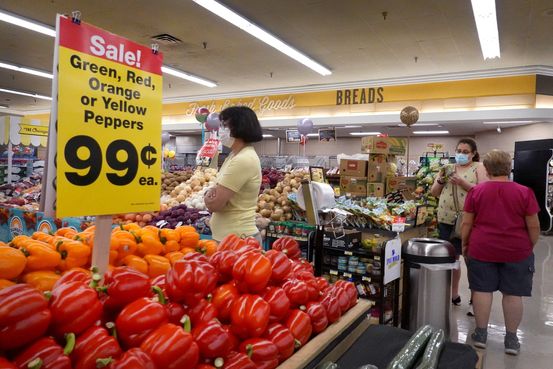 The Commerce Department’s measure of inflation showed Friday that consumer prices rose 3.9% in May from a year before, a big jump but smaller than the 5% jump registered by a Labor Department measure released two weeks ago.

So which is it? Both. Each is an official government consumer inflation gauge, but they are constructed differently and yield different results. Though they tend to move in the same general direction over time, Labor’s consumer-price index, or CPI, typically runs a bit higher than Commerce’s price index of personal-consumption expenditures, or PCE index.

Both rose significantly more in the past year than in recent years before the Covid-19 pandemic, which caused prices to plunge in the spring of 2020 as many businesses shut down and consumers hunkered down at home. The 12-month increases in both indexes last month were the biggest in nearly 13 years.

The CPI draws broader attention in general news reports, partly because it is released earlier in the month, but investors and economists also follow the PCE index because it is the Federal Reserve’s preferred gauge for assessing inflation relative to its 2% target.

Here is a brief explanation of some of the variations.

How do the CPI and PCE index differ?

To start, they attempt to measure different universes of spending. The CPI aims to capture changes in the cost of living based on what urban consumers pay out of pocket for a hypothetical basket of goods and services. The PCE index shows a broader basket of price changes, including in rural areas. It also includes prices paid by nonprofit organizations that provide services to households, by government programs such as Medicare and Medicaid and by employer-sponsored health care plans.

This difference in approaches explains some of the biggest differences between the two indexes, said

The PCE index also uses a formula that adjusts for changes in consumer behavior—such as when shoppers buy more of one thing and less of another when their relative prices change, or what economists call the “substitution effect.”

Are the data gathered differently?

The Labor Department each month canvasses 22,000 supermarkets, gasoline stations, department stores and other retail establishments in 75 urban areas. These data flow into hundreds of price indexes for restaurant meals, cars, toys, prescription drugs and countless other products people buy in their daily lives, and those indexes are ultimately aggregated to become the CPI.

The PCE index draws most of its monthly price data from these CPI’s subindexes, but also taps other sources.

Join the conversation below.

The CPI measures price changes for a basket of goods and services that is updated every two years. The PCE index’s formula changes the weights of the items more frequently to account for the substitution effect—for example, if consumers buy fewer apples and more pears when apple prices rise and pear prices don’t.

“That’s one of the reasons why the Fed prefers” the PCE index, said

chief financial economist at Jefferies LLC. “It’s a better reflection of reality and how people consume.”

Why does PCE tend to run lower than CPI?

The substitution effect captured by the PCE index formula is part of why it has historically shown slightly less inflation than CPI. Another reason is that it usually gives less weight to housing than CPI, and a larger weight for goods, said

However, the historical gap between the PCE index and the CPI collapsed during the pandemic, and the substitution factor is one reason. “In theory people should buy more of the cheaper stuff and less of the expensive stuff. But when you think of what they’ve been doing— buying more goods which have been inflating rapidly and fewer services which had been disinflating—people were doing the opposite,” said Ms. Markowska.

Workers at Deere & Co. ratified a new six-year contract Wednesday, ending a strike against the farm and construction machinery...

Jobless claims declined to a pandemic low last week, a sign companies are hesitant to lay off employees as the...

Why Express, Urban Outfitters and J.Crew Now Sell Items From All Over Online

Express Inc., EXPR -3.59% best known as a presence in American malls, has been testing a new strategy: selling other...

One of MDC Partners Inc.’s largest shareholders is opposing the advertising company’s proposed merger with Stagwell Media, a private-equity fund...

JOHANNESBURG—On a morning last November, officers from customs and an organized crime unit, backed by two K9 units, raided a...

Bitcoin enthusiasts prize the cryptocurrency as beyond the reach of any government. Yet up to three-quarters of the world’s supply...

This Year’s Influx of Directors Starts Shift in Boardroom Diversity

The biggest U.S. companies sharply increased the number of new Black and Latino directors named to their boards this spring,...